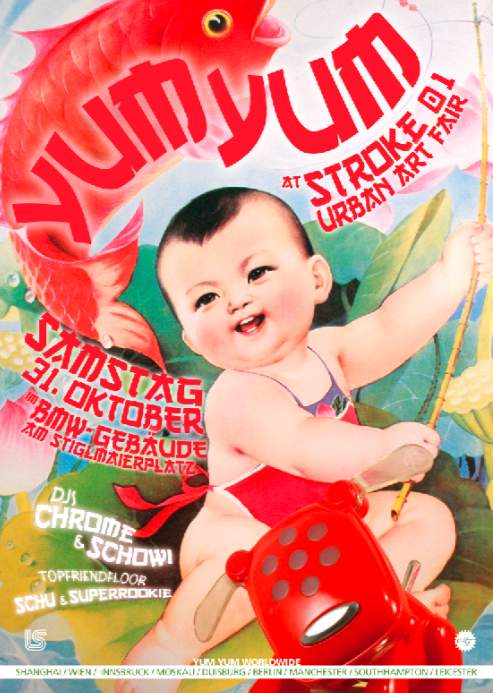 YES, this one is taking place on Saturday October 31st at  Stroke – the Urban Art Fair (check their website for all infos on the exhibition) – how to get there via google maps. Beneath our Artwork you will find a couple of Artimpressions that i have lifted straight from their site. Here are some of the Artists: More on this exhibition next week

First let me say this: WE have NOT MOVED to Kongresshalle. We are just having two dates at that spot, since Registratur is throwing their KONGRESS nights there – but only every now and then – GET IT?

The last Saturday was a nice dance and loads of people turned up as you can see from the pictures, but i am and always will be straight forward when it comes to saying how i/we feel about certain things.

A lotta things were in no way YUM YUM. let me list them down: a.) the lights were too “big room disco” for us. b.) no second room/ top friend area – for a solid 10€ is not fair. c.) it was too nice – big room fix again. d.) we dj’s were playing down “on” the people – from some throne-like stand. Again, not cool, not YUM YUM like and certainly something for big-headed superstars. e.) One of the most important things – we started to late. The band started way too late which pushed everything backwards. I know you hiked to the spot just to be kept waiting and take away from our playtime – which our people payed for – not fair again! Which ended in the dj’s being pissed of, having to pick up from where the live show left em. Which resulted in similar sets, since everyone was going for the sureshots.

We will do a second date @ Kongress – BUT – ONLY if these things are FIXED. We have discussed these matters with Registratur already.

I know often at times i am too critical of everything, including myself, but thats the way it is – and there’s no progress if you only point out the good things. It was an amazing dance – An incredible mass of people turned up – one week after the Oktoberfest – and one day after Boyz Noize – and they had a BALL!! The location is real nice, IF its done nice.

THANK YOU FOR MAKING IT HAPPEN – SEE YOU BACK SOON ON OCTOBER 31ST @ STROKE. After the Registratur closing we had a heated debate where to go to, and every single club in munich offered us a premium spot. But we decided to keep it interesting and head out to Kongresshalle twice, do something at the huuge Stroke Urban Art Fair exhibition and concentrate more on off locations, cause not a single spot in munich came close to the Registratur.

So this Saturday we are having our monthly night @ Kongresshalle, where we had our Sommerfest, which turned out to be the best party i have been to this year. Djs will be chrome, max mausser & notfx. There will be an outside area !!! Which is in my eyes very importent no matter what – need to step outside and catch a breath now and then. The 2nd floor was supposed to be a top friend floor, but we are not even sure if we can have a 2nd area – due to some police regulations. We ll see how that works out. Ps before we start the night there will be a live show with Buraka Som Sistema starting at 9pm, which will be over by latest 11.30 – thats when we will start. No worries about the entry – The concert is handled separately: So regular entry fee from 11pm on – before that, its the entry fee for Buraka – anybody who is gonna stay after the show is free to do so.

How to get to Kongresshalle via google maps. right behind munichs little statue of liberty (actually beerdinking)